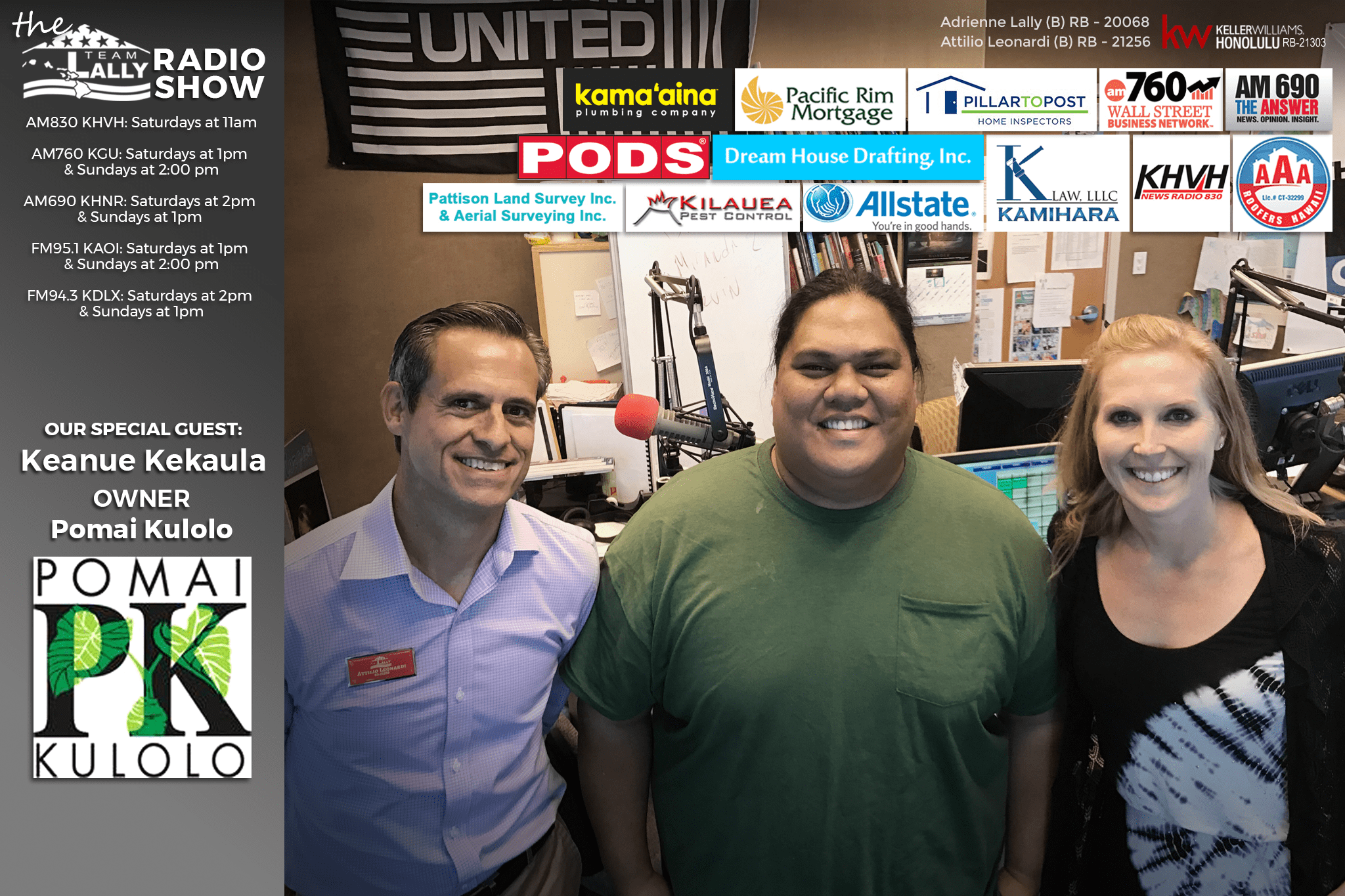 Our featured guest in this episode of the show is Keanue Kekaula owns and operates Pomai Kulolo.  Keanue talks about growing up in the heart of Kalihi.
He then tells us the story of how Pomai Kulolo started.  We also talk about what goes on behind the scenes in making and selling Hawaiian food and where to go to try out the delicious treats from Pomai Kulolo.
Also in this episode: Quotes of the day, Tips of the week, special events, this week’s Open houses and Coming soon listings.
Who is Keanue Kekaula?
Keanue Kekaula owns and operates Pomai Kulolo. Originally started in 2008, he used a family recipe to begin making his “kulolo” and sold it roadside at various locations throughout the island.
Seeing the great response to his kulolo, and other offerings such as haupia and his own creation, haulolo, he decided to take his business to a higher level and began selling in farmer’s markets throughout Oahu.
Here today to talk more about Pomai Kulolo and what makes it such a big hit in our local community, let’s welcome our guest, .
To reach Keanue you may contact him in the following ways:
Email: keanue@pomaikulolo.com
Website: pomaikulolo.com
LinkedIN: https://www.linkedin.com/in/keanue-kekaula-49a89884/

Janyce: Well, one’s spelled with “c” and the other one’s spelled with an “s,” but actually, a cesspool is simply a holding tank that gets pumped, a septic system is a little bit more complicated and is usually uh, includes what’s called a leech field where uh, the liquids are you know, they’re minimally treated but they’re actually leeching out into a portion of the property. And you are not allowed to build over that portion of the property. There are some more complicated systems available, that do a much more advanced level of treatment and actually put out clear water, so you know, the soil condition remains better, but at this point, the city’s not requiring that, they’re just saying that the cesspools must go and become septic systems. So, there’s at least one lawsuit that I am aware of where a client actually uh, one of my realtor clients purchased a home that had a building permit for an addition. It was one of those situations where there was an existing cesspool, the people you know, agreed that it was going to be updated, all of this was documented on the building permit, but they didn’t do that part of it. And apparently, it’s happening quite often, so, at this point, the state department of health, waste water branch, is reviewing all building permits for properties that have cesspools. Whether they are doing anything that relates to waste water, or not.
Attilio: Oh wow, and what do you, I mean—
Janyce: And they are completely putting a stop to the permits and that, refusing to sign off until the person upgrades the cesspool to a septic system and they are given written certification of the cesspool being fully, I mean, the septic systems being fully-functional by the engineer who would have signed off on the design of the new septic system.
Attilio: Now, are they, do they have any, any, what is it, the cost?
Adrienne: Yeah, I was going to say like, what is, what is the cost look like on that?
Janyce: I don’t honestly know what those things cost, but I do know that at this point, I have a client who uh, had me do a permit for a backup generator, and his permit isn’t going anywhere until he upgrades the cesspool that’s there to a septic system. That’s what we’ve been told, in writing, so as a perfect case of somebody who’s uh, project has nothing to do with waste water, no added bathrooms, no added bedrooms. But they’re stopping his project until he handles that.
Adrienne: So, beware! You’ve got a cesspool, and you want to make any changes, not going to happen.
Attilio: So, if you want to—
Janyce: If you need to put in your budget, the cost of a new septic system. Upgrade.
Attilio: So, here’s our lesson for today. If you want to get the straight poop—
All: (laughing)
Attilio: You need to give Janyce a call and she’s going to make sure, you know, you don’t end up in a pile of it. No. (laughing) And uh. Yeah, because I mean, I can imagine that you’ve discovered this after the fact and a lot of holy beep, holy beep is what you’re saying all the time. And uh, uh.
Adrienne: Just call Janyce.
Attilio: Just call Janyce.
Janyce: Well the problem is, is the people are trying to budget, paint, if you need to expand your home because there’s a new baby, there’s an elder relative moving in, for whatever reason, people are not applying for building permits, paying for architectural services, and planning to pay for construction just for a ___. They’ve got serious concerns and they have a budget in place and then to be, have everything come to a screeching halt for now you know, and then the cost, and it’s critical. Uh.
Adrienne: Now you look for it.
Janyce: I like to know that ahead of time.
Attilio: Now you know!
Adrienne: Yeah, you can’t, now you know.
Attilio: Thanks, Janyce!
Adrienne: Thank you!
Janyce: Take care!
Attilio: Alright, so if you have more questions for Janyce, where can they reach her at, Adrienne?
Adrienne: Give her a call at 206-7107. You can also find her online at www.dreamhousedrafting.com.
Attilio: Alright, so we are going to be taking a break here! We’re, our, but stay with us, when we come back, we’ll be talking with uh, Keanue?
Adrienne: Mmm-hmm.
Attilio: I’m probably messing that up, but he’s going to help me out with that name pronunciation. Kekaula is his last name, of Pomai Kulolo. Who will take us, talk to us about Hawaiian food from sweet ___ to savory Kalua pigs. Stay tuned.
Adrienne: Stay with us!
[Music fades to commercials]

Adrienne: Mike Metts of Kama’aina Plumbing!
Attilio: And Thomas Pattison with Pattison Land Surveying!
Adrienne: Myron Kamihara of Kamihara Law!
Attilio: If you want to get ahold of any of our sponsors, just go to www.teamlally.com.
Adrienne: We also want to give a big thank you to Paco, our producer here in the studio!
Attilio: Alright, chi-hoo!
Adrienne: Make sure to tune in next week, we’ll have an awesome guest talking about something that’ll change your life—
Attilio: Forever! This is the Team Lally real estate show, home of the guaranteed—
Adrienne and Attilio: SOLD PROGRAM!
Adrienne: If we can’t sell your home at the agreed-upon price and your time frame, we’ll have it bought for cash.
Adrienne and Attilio: THANKS, AND ALOHA!